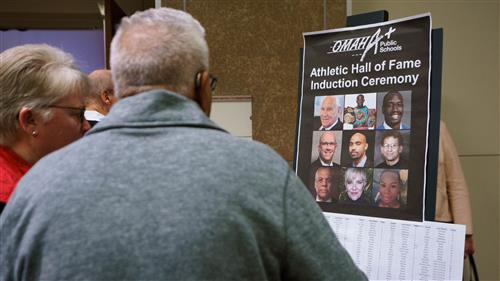 Nine former athletes, coaches and administrators from Omaha Public Schools were named as the 15th class of the Omaha Public Schools Athletics Hall of Fame. Honorees included representatives from across the district’s middle and high schools. They were formally inducted into the Hall of Fame at a banquet event Saturday, Nov. 19, 2022, at the CHI Health Center.

Paul Brown, Benson High, lettered in football, basketball and baseball while at Benson High before playing collegiate baseball at the University of Iowa. Brown and his wife were inaugural members of the Benson High Foundation.

Terence ‘Bud’ Crawford, Bryan High, remains ranked as one of the best professional boxers in the world. Turning pro in 2008, Crawford held multiple World Championships including his reign as the WBO Welterweight Champion of the World since 2018.

Chequetta (Bearfield) Jackson, Burke High, starred as a track athlete and continued to an All-American career at the University of Illinois. Jackson won All-Class gold in 1997 and 1998 at the NSAA State Track & Field meet, concluding her high school career with four gold medals in her senior year.

Adam Wright, North High, quarterbacked the Vikings to an NSAA football playoff appearance in his senior year (1995) before going on to become the all-time leading rusher at the University of Nebraska-Omaha. Wright was an All-Division and All-Metro selection for the Vikings before being named an NCAA All-American while at UNO.

Cara Riggs, Northwest High, participated in numerous activities during her time as a student in Omaha Public Schools. Riggs continued with a 30-year career as a teacher, coach and administrator within the district. Riggs now works for the National Center for Urban School Transformation out of San Diego State University and is a multiple-time published author.

Jim Hartung, South High, is the most decorated gymnast in Nebraska history, having won 18 gold medals in three years of state high school gymnastics meets. His prep career culminated in being named Omaha World-Herald and Lincoln Journal Star athlete of the year in 1978. Hartung also won multiple national championships while attending South High and went on to be named an All-American for the University of Nebraska and Olympic qualifier in men’s gymnastics.

Preston Love, Jr., Tech High, lettered in football, basketball and track and field in his time as a Trojan. Love was named to All-City and All-Tournament teams during his career and won the 120 high hurdles in his senior season at state track. Love would go on to star at both Northwestern (Ill.) University and the University of Nebraska, be drafted by the Detroit Lions, become a published author, playwright and active in politics – organizing Rev. Jesse Jackson’s 1984 Presidential campaign.

Tom Robertson, Middle School Honoree, served Omaha Public Schools as a coach, mentor, administrator and leader for the past three decades in numerous capacities. Robertson’s impact on the lives of countless youth and others in Omaha has been immeasurable and was selected for this honor by a group of his peers.