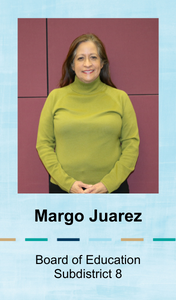 The Omaha Public Schools Board of Education filled a vacancy during its regular meeting on Monday, Dec. 13.

Following interviews with the two candidates who applied, Margo Juarez and Evan Schmeits, the Board selected Juarez for the Subdistrict 8 seat. The decision came after two split votes of 4-4. A third round determined the outcome with a vote of 7-1 in favor of Juarez.

Juarez, a retired federal government employee, spent more than 20 years as a tax examiner for the Internal Revenue Service. She currently works part-time for the City of Papillion as a customer service representative.

Even with her commitment to Subdistrict 8, Juarez hopes her time on the board makes broad impact. “I don’t want to be so narrow as to always just looking at my own district,” she said. “We’re all part of the system and I want to make contributions so that the whole system succeeds.”

Juarez was sworn in immediately following Monday’s vote. She will serve the unexpired portion of the term left open by Kimara Snipes’ resignation. Snipes stepped away from her seat in November when she moved out of the Subdistrict 8 boundaries.

Read more about both candidates at this link and watch their full interviews here.